Crew Gets Creative to Remove Vegetation in Manatee County 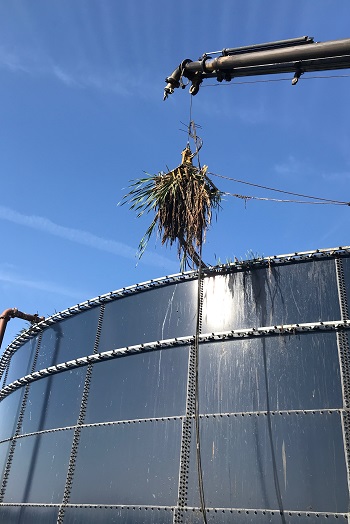 The sludge holding tank at the North Water Reclamation Facility in Palmetto, Florida was overrun with cattails and rags.  At initial glance, it looked like a simple job of removing the 4-f00t high vegetation off the top.  However, once the project was underway, an 8-foot root system with rag material woven throughout was discovered underwater.

USST’s unique Combination3® trucks are equipped with a 49-foot extendable boom, along with vacuum, downhole pump and jetter.

“We used our 49-foot extended boom with hydraulic claw to remove the vegetation from the holding tank while it remained in operation,” says USST’s Field Supervisor, Paul Del Favero, who has been with the company since 2015.  Lead by Paul, the USST crew removed almost 60-CY of material from the structure and the project was completed on schedule. 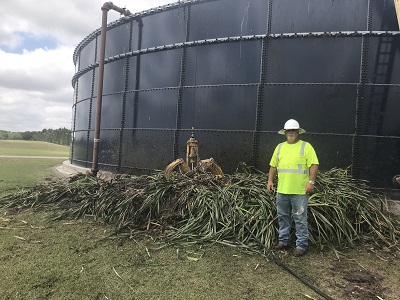 Meanwhile, a FOG tank at the Southeast Regional WWTP in Bradenton, Florida was also in need of cleaning.  We talked with Manatee’s Utilities Plant Maintenance Supervisor, Donny Adams regarding the FOG tank project, who has been with Manatee County since 2006.

“The 20-foot diameter by 15-foot high tank has a mixer that needed service, but we were unable to access it due to the large amount of grease that had solidified on the bottom,” said Donny.  Approximately 4-feet of FOGs lay on the bottom of the tank, and was removed by the USST crew via confined space entry.

“We used supplied air, life lines, blower fans, gas meters and more, following all protocols for confined space entry, and ended up removing 36-CY of material,” confirmed Paul Del Favero.  Despite the large amount of material needing to be removed from the tank as well as the difficult conditions, the project was completed ahead of schedule, giving back valuable capacity to the facility.

“Storage capacity had been cut in half due to this tank being out of service.  The crew that was onsite did a tremendous job getting the tank cleaned out very quickly,” confirmed Donny, “[…] we really appreciated the fantastic job they did.”

Experiencing reduced tank capacity?  Our knowledgeable representatives can stop by your facility for a free site assessment and put together a specialized plan to safely restore valuable capacity.  All you have to do is give us a call at (844) 765-7866 or request a free, customized quote here. 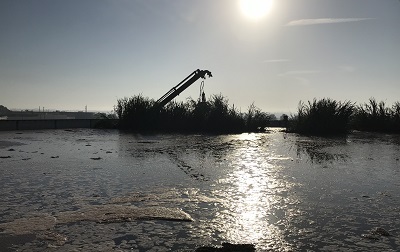 Honoring All Who Served – Veterans Day

We use cookies on our website to give you the most relevant experience by remembering your preferences and repeat visits. By clicking “Accept”, you consent to the use of ALL the cookies.
Do not sell my personal information.
Cookie SettingsAccept
Manage consent

This website uses cookies to improve your experience while you navigate through the website. Out of these, the cookies that are categorized as necessary are stored on your browser as they are essential for the working of basic functionalities of the website. We also use third-party cookies that help us analyze and understand how you use this website. These cookies will be stored in your browser only with your consent. You also have the option to opt-out of these cookies. But opting out of some of these cookies may affect your browsing experience.
Necessary Always Enabled
Necessary cookies are absolutely essential for the website to function properly. These cookies ensure basic functionalities and security features of the website, anonymously.
Functional
Functional cookies help to perform certain functionalities like sharing the content of the website on social media platforms, collect feedbacks, and other third-party features.
Performance
Performance cookies are used to understand and analyze the key performance indexes of the website which helps in delivering a better user experience for the visitors.
Analytics
Analytical cookies are used to understand how visitors interact with the website. These cookies help provide information on metrics the number of visitors, bounce rate, traffic source, etc.
Advertisement
Advertisement cookies are used to provide visitors with relevant ads and marketing campaigns. These cookies track visitors across websites and collect information to provide customized ads.
Others
Other uncategorized cookies are those that are being analyzed and have not been classified into a category as yet.
SAVE & ACCEPT
Powered by