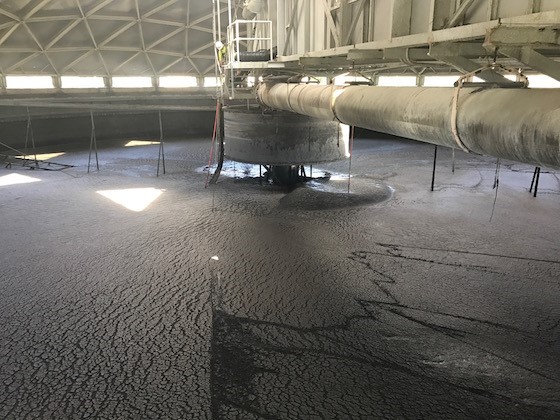 USST is removing sand and grit from a wastewater treatment plant in Orlando, FL.

The USST crew is removing material from two clarifiers at the plant. Both are 120 feet in diameter and 16 feet deep. Approximately 120 tons of sand and grit has been removed from Clarifier 1.

“We performed a confined space entry, which includes constant air quality monitoring,” said Paul Del Favero. “Fall protection is being used as well while on the catwalk inside the tank.”

The crew began work on Clarifier 2 this week, running the Model 949 and Model 934 simultaneously during the project.

“We have been using our proprietary equipment for the cleaning of this tank,” Del Favero said. “It’s been a real team effort.

USST expects to complete the cleaning of clarifier 2 this week.

$19.4M in Financing to Improve Ohio Wastewater and Drinking Water

Get news delivered straight to your inbox the day it gets published.

We use cookies on our website to give you the most relevant experience by remembering your preferences and repeat visits. By clicking “Accept”, you consent to the use of ALL the cookies.
Do not sell my personal information.
Cookie SettingsAccept
Manage consent

This website uses cookies to improve your experience while you navigate through the website. Out of these, the cookies that are categorized as necessary are stored on your browser as they are essential for the working of basic functionalities of the website. We also use third-party cookies that help us analyze and understand how you use this website. These cookies will be stored in your browser only with your consent. You also have the option to opt-out of these cookies. But opting out of some of these cookies may affect your browsing experience.
Necessary Always Enabled
Necessary cookies are absolutely essential for the website to function properly. These cookies ensure basic functionalities and security features of the website, anonymously.
Functional
Functional cookies help to perform certain functionalities like sharing the content of the website on social media platforms, collect feedbacks, and other third-party features.
Performance
Performance cookies are used to understand and analyze the key performance indexes of the website which helps in delivering a better user experience for the visitors.
Analytics
Analytical cookies are used to understand how visitors interact with the website. These cookies help provide information on metrics the number of visitors, bounce rate, traffic source, etc.
Advertisement
Advertisement cookies are used to provide visitors with relevant ads and marketing campaigns. These cookies track visitors across websites and collect information to provide customized ads.
Others
Other uncategorized cookies are those that are being analyzed and have not been classified into a category as yet.
SAVE & ACCEPT
Powered by